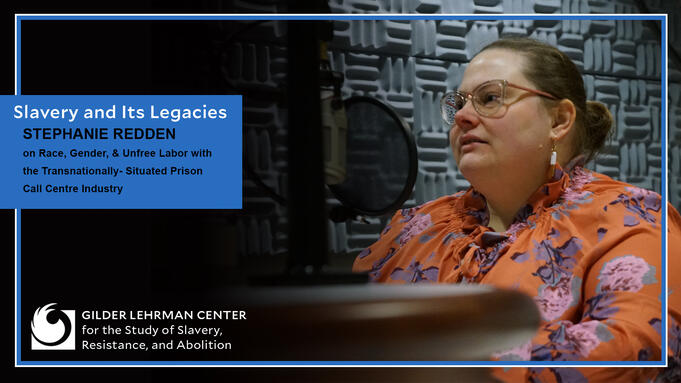 Thomas Thurston talks with Stephanie Redden on her project “Hello from the Inside: Race, Gender, and Unfree Labor with the Transnationally-Situated Prison Call Centre Industry”.

Dr. Redden completed a B.A. (Honours) in Political Science at Dalhousie University in 2008, a M.A. in Political Science at Acadia University in 2009, and a Ph.D. in Political Science with a specialization in Political Economy at Carleton University in November 2016. After completing her Ph.D. she worked for the Canadian federal government, across several departments, specializing in the application of Gender-Based Analysis Plus (GBA+) throughout the policy process. In July 2019, Dr. Redden joined the Gilder Lehrman Center for the Study of Slavery, Resistance, and Abolition as their 2019-2020 Modern Slavery and Human Trafficking Fellow. As part of the fellowship she will be undertaking research on the utilization of prisoners as call center labour in the United States.

Dr. Redden has presented her research at several top international scholarly conferences, including several International Studies Association (ISA) annual conventions, as well as at the Pan-European Conference on International Relations. Additionally, her work has been published in the International Feminist Journal of Politics, Globalizations, as well as a number of edited collections. She is currently preparing a manuscript based on her doctoral research project which will be published as part of Rowman and Littlefield’s Global Political Economies of Gender and Sexuality series in 2020.