Karin Zipf on How the American Farmworker Fought Migrant Slavery 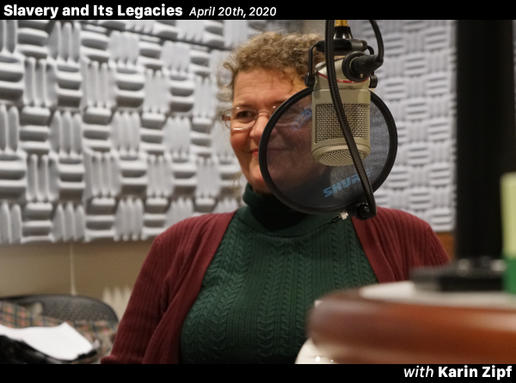 Thomas Thurston talks with Karin Zipf on her chapter titled “A Climate of Fear” from her upcoming book Field Ghosts: How the American Farmworker Fought Migrant Slavery.

Dr. Karin Zipf’s North Carolina roots run deep. Born in Durham and raised in Rocky Mount, she developed a fascination for southern history. As a college student, she attended and graduated from Wake Forest University in Winston-Salem. After six years pursuing her masters and doctoral degrees in history at the University of Georgia, Zipf returned to North Carolina to teach at North Carolina Wesleyan College. From 2000-01 she served on the faculty at Appalachian State University in Boone, North Carolina. In August 2001, she joined the East Carolina University History Department in Greenville.  As her life and career have progressed, Dr. Zipf has reaffirmed her deep and abiding intellectual interest in the history of the United States, the American South, and the Atlantic World. Her interests lie in the study of gender, sexuality and race relations in the 19th and early 20th century American South.

Her book, Labor of Innocents: Forced Apprenticeship in North Carolina, 1715-1919 appeared in 2005. The book examines the social and legal impact of apprenticeship on historical constructions of the family and patriarchal relations. Her articles on gender, race, women, apprenticeship, and Reconstruction have appeared in the Journal of Southern History, the Journal of Women’s History, the North Carolina Historical Review, and the Georgia Historical Quarterly. Her most recent book, Bad Girls at Samarcand: Sexuality and Sterilization in a Southern Juvenile Reformatory (LSU Press, 2016), examines North Carolina’s institutionalization and sterilization of juveniles in the Depression-era South.