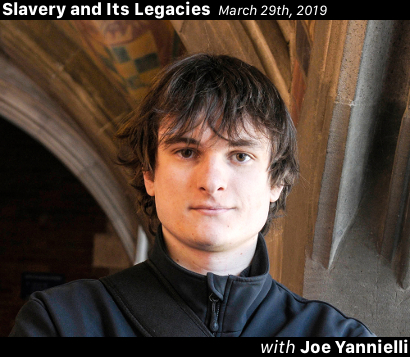 Dr. Joe Yannielli joins Thomas Thurston in the studio to talk about the Mendi Mission, established by radical abolitionists in the wake of the Amistad rebellion, which occupied territory in what is now southern Sierra Leone between 1842 and 1882.

Dr. Joseph Yannielli is a Lecturer (Assistant Professor) in Modern History at Aston University in Birmingham, UK. Before this he was a postdoctoral associate at the Gilder Lehrman Center for the Study of Slavery, Resistance, and Abolition and a Lecturer in History at Yale University. He also served as a Perkins Fellow at Princeton University, affiliated with the Princeton Humanities Center and the Center for Digital Humanities. Dr. Yannielli received his Ph.D. from Yale University.

His published works include:
“Mo Tappan: Transnational Abolitionism and the Making of a Mende-American Town,” Journal of the Civil War Era, Vol. 8 (June 2018): 190-214.