James Scott on A Deep History of the Earliest States

In this 2 part episode we join James Scott as he presents some of the main arguments in his upcoming book Against the Grain: A Deep History of the Earliest States. This presentation was recorded at Yale University on April 13th, 2017. 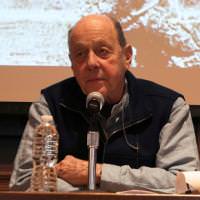 James Scott is the Sterling Professor of Political Science and Professor of Anthropology and is Director of the Agrarian Studies Program. He is a Fellow of the American Academy of Arts and Sciences, has held grants from the National Science Foundation, the National Endowment for the Humanities, and the Guggenheim Foundation, and has been a fellow at the Center for Advanced Study in the Behavioral Science, Science, Technology and Society Program at M.I.T., and the Institute for Advanced Study, Princeton.

Recent publications include Seeing Like a State: How Certain Schemes to Improve the Human Condition Have Failed, Yale University Press, 1997; “Geographies of Trust: Geographies of Hierarchy,” in Democracy and Trust, 1998; “State Simplifications and Practical Knowledge,” in People’s Economy, People’s Ecology, 1998; and The Art of Not Being Governed: An Anarchist  History of Upland Southeast Asia (Yale  Press, 2009). More about James here