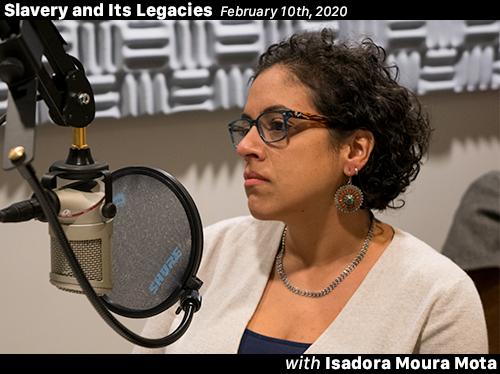 Thomas Thurston talks with Isadora Moura Mota on her work titled “Afro-Brazilian Atlantic: Slavery and Anglo-American Abolitionism in the Age of Emancipation”.

Isadora Moura Mota is a historian of slavery in Brazil and the Atlantic world. Her scholarship focuses on modern Brazilian history, comparative slavery, abolitionism, literacy, and the African diaspora to Latin America.

Mota’s first book, An Afro-Brazilian Atlantic: Slavery and Anglo-American Abolitionism in the Age of Emancipation, explores the role of Afro-Brazilians in shaping the history of abolition in the Atlantic world. The study traces the development of a geopolitical imagination among people of African descent within a transnational context. Focusing on the everyday politics of knowledge production among Brazilian slaves, freedpeoples, and maroons, Mota examines the escalation of Afro-Brazilian activism in connection to British efforts to suppress the slave trade, the presence of U.S. and Confederate vessels in Brazilian waters, and the circulation of news about U.S. emancipation within the Brazilian empire. Ultimately, she argues that Afro-Brazilians also shaped broader political discourses on the meanings of race, citizenship, and human rights, therefore positing Brazil as an important force in the Age of Emancipation. The book is under contract with the University of Pennsylvania Press.

Future research directions include a social history of slave literacy during the War of the Triple Alliance (which pitted Brazil, Argentina, and Uruguay against Paraguay from 1865 to 1870) as well as a study of shared labor struggles between European colonists and slaves in the plantations of Southeastern Brazil.