Carol Anderson on Race, Voting, and Democracy in times of COVID 19 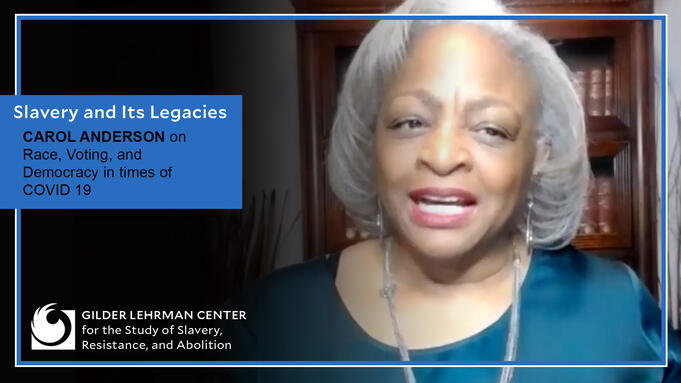 Carol Anderson is Charles Howard Candler Professor of African American Studies at Emory University. Professor Anderson’s research and teaching focus on public policy; particularly the ways that domestic and international policies intersect through the issues of race, justice and equality in the United States.

Professor Anderson is the author of Eyes Off the Prize: The United Nations and the African-American Struggle for Human Rights, 1944-1955, which was published by Cambridge University Press and awarded both the Gustavus Myers and Myrna Bernath Book Awards.  In her second monograph, Bourgeois Radicals: The NAACP and the Struggle for Colonial Liberation, 1941-1960, also published by Cambridge, Professor Anderson uncovered the long-hidden and important role of the nation’s most powerful civil rights organization in the fight for the liberation of peoples of color in Africa and Asia. Professor Anderson’s most recent work, One Person, No Vote: How Voter Suppression is Destroying Our Democracy, was published by Bloomsbury and a finalist for the PEN/Galbraith Award in Non-fiction and a National Book Award Longlist finalist in Non-fiction. Click here for more about One Person, No Vote, and here for more about its most recent award.  Her book White Rage: The Unspoken Truth of Our Racial Divide, published by Bloomsbury, is a New York Times Bestseller and was a New York Times Editor’s Pick for July 2016. In March 2017, it won the National Book Critics Circle Award for criticism. Click here for more about White Rage, and here for more about its most recent award.

Her research has garnered substantial fellowships and grants from the John Simon Guggenheim Foundation, the American Council of Learned Societies, the Ford Foundation, National Humanities Center, Harvard University’s Charles Warren Center, the Committee on Institutional Cooperation (The Big Ten and the University of Chicago), and the Gilder Lehrman Institute of American History.

She has also served on working groups dealing with race, minority rights, and criminal justice at Stanford’s Center for Applied Science and Behavioral Studies, the Aspen Institute, and the United Nations.  Her op-ed in the Washington Post was the most shared for the newspaper in 2014.

Professor Anderson was a member of the U.S. State Department’s Historical Advisory Committee and is currently on the Advisory Board of the National Economic and Social Rights Initiative.

She is a Phi Beta Kappa graduate of Miami University, where she earned bachelor’s and master’s degrees in Political Science, International Relations, and History. She earned her Ph.D. in history from The Ohio State University.