Anita Rupprecht on ‘Liberated Africans’, Indenture and Resistance in the British Caribbean 1807-1828 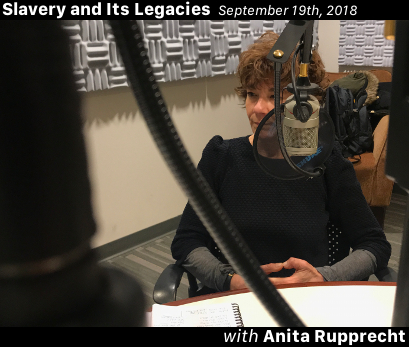 Anita Rupprecht joins Thomas Thurston on this episode of Slavery and Its Legacies to discuss her project , “‘Liberated Africans’, Indenture and Resistance in the British Caribbean 1807-1828”

An interdisciplinary scholar, Anita Rupprecht’s primary research interests focus on the British and American slave trades, enslavement, resistance and empire. She is interested in the politics of history making, representation and cultural memory as they relate to these contexts. She has published widely on slave ship rebellion, the British abolition campaigns, the shaping of British emancipation in the Caribbean, the development of maritime financial insurance in the context of the transatlantic slave trade as well as on related contemporary questions of reparation and ‘reparative history’.

She is currently working on a book project about the ways in which colonial labour relations were reconfigured in Caribbean slave societies between the 1807 abolition of the British slave trade and the passing of the Emancipation Act in 1833. By focusing on the lives of so-called indentured ‘Re-captured Africans’, and their experiences ‘from below’, she is exploring the ways in which the movement from slavery to freedom can be understood in terms of a wider imperial continuum of coerced labour forms.

She is also engaged in developing a wider collaborative project (with Cathy Bergin) exploring the idea of ‘reparative history’. In particular, they are interested in how claims on the past are determined by contemporary politics of ‘race’, and the particular ways in which those claims tend to occlude the centrality of the black radical tradition. Most broadly, they are thinking about how we might conceptualise and trace the historical legacies of transatlantic slavery both within the history of capitalism and as challenges to dominant liberal paradigms of ‘freedom’.

As well as these historical and conceptual concerns, Rupprecht also maintains a research and teaching interest in the history and politics of postcolonial and cultural theory, critical practice and in contemporary literary revisitings of slavery in Black Atlantic contexts.

Anita Rupprecht completed a BA (Hons.) degree in English Literature and an MA in Culture and Social Change at the University of Southampton before studying for a D.Phil. at the University of Sussex. Her AHRB funded doctoral thesis focused on the anti-slavery campaigns, the Enlightenment culture of sentiment and the slave narrative. Prior to teaching at the University of Brighton she held posts at the University of Sussex and Winchester. She is a member of the Steering Group of the Centre for Memory, Narrative and Histories and developing the ‘Race’ and Representation: The politics of history, memory and reparation’ research area. She is the co-founder and co-convenor of the research seminar series, ‘Politics, Philosophy and Aesthetics’.

She was a Visiting Fellow at the Gilder Lehman Centre for the Study of Slavery, Abolition and Resistance, Yale University, in Spring 2018. She has been awarded a Leverhulme Research Fellowship during 2019-2020 to work on her book project, ‘Indenturing Re-Captured Africans in the Caribbean, 1807-1828’.