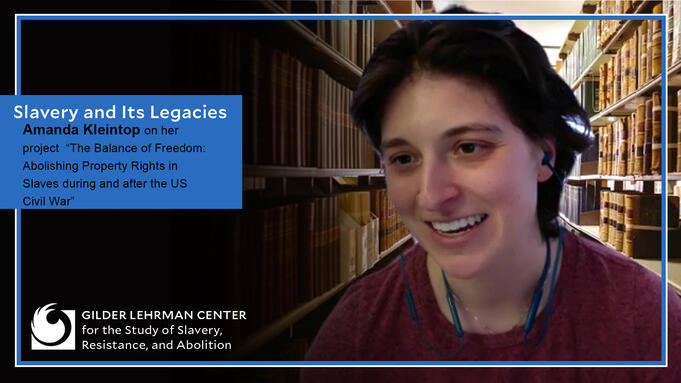 Thomas Thurston talks with Amanda Kleintop on her project titled: “The Balance of Freedom: Abolishing Property Rights in Slaves during and after the US Civil War”

Dr. Kleintop is a historian of the US Civil War and Reconstruction, and slavery and emancipation in the Atlantic World. Her manuscript project, The Balance of Freedom: Abolishing Property Rights in Slaves after Emancipation, tells a novel story of the Civil War and emancipation by examining post-war debates about property rights in slaves. Even in defeat, white southerners fought to retain the financial value of enslaved people by demanding federal compensation for emancipation. Other Americans, both white and black, demanded that former slaveholders bear the financial burden of emancipation to dissolve an immoral institution that had started a bloody civil war. In section four of the Fourteenth Amendment, Congress guaranteed that no slaveowner or slave state would receive reimbursements for freed people. After losing this battle, too, white southerners obscured the history of their claims and convinced most white Americans that they had never asked for such compensation. To do so would have suggested that they had fought the Civil War to protect their ability from profit from slavery, a suggestion they had come to vigorously deny. Instead, they downplayed their compensation claims and crafted a new historical narrative that absolved themselves of four years of bloodshed and generations of enslavement.

The Balance of Freedom has been supported by the National Endowment for the Humanities, the American Historical Association, the Gilder Lehrman Center for the Study of Slavery, Resistance, and Abolition at Yale University, the American Bar Foundation (Chicago, IL), and the American Society for Legal History, among others.