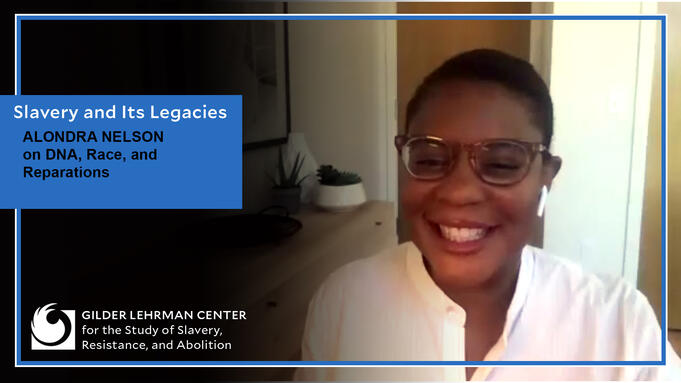 Alondra Nelson is president of the Social Science Research Council and the Harold F. Linder Professor of Social Science at the Institute for Advanced Study, an independent research center in Princeton, New Jersey. She was previously professor of sociology at Columbia University, where she served as the inaugural Dean of Social Science. Nelson began her academic career on the faculty of Yale University and there was recognized with the Poorvu Prize for interdisciplinary teaching excellence.

Nelson has published widely-acclaimed books and articles exploring science, technology, medicine, and social inequality. Her recent publications include coauthored articles in PLOS: Computational Biology, Genetics in Medicine, and Du Bois Review: Social Science Research on Race. She is currently at work on a book about science and technology policy in the Obama administration and new research on the sociology of bioethics.

Nelson is the award-winning author of The Social Life of DNA: Race, Reparations, and Reconciliation after the Genome. Her books also include Body and Soul: The Black Panther Party and the Fight against Medical Discrimination, as well as Genetics and the Unsettled Past: The Collision of DNA, Race, and History (with Keith Wailoo and Catherine Lee) and Technicolor: Race, Technology, and Everyday Life (with Thuy Linh Tu). In 2002, Nelson edited “Afrofuturism,” an influential special issue of Social Text, drawing together contributions from scholars and artists, who were members of a synonymous online community she established in 1998.

Nelson’s essays, reviews, and commentary have appeared in The New York Times, The Washington Post, The Wall Street Journal, Science, Nature, Le Nouvel Observateur, The Boston Globe, and on National Public Radio, the New Yorker Radio Hour, and PBS Newshour, among other venues.

She is a member of the American Academy of Arts and Sciences and the American Philosophical Society. Nelson has contributed to national policy discussions on inequality and the social implications of new technologies, including artificial intelligence, big data, and human gene-editing. She has held visiting professorships and fellowships at the Max Planck Institute for the History of Science, the BIOS Centre at the London School of Economics, and the Bavarian American Academy. Her research has been supported by the Ford Foundation, the Andrew W. Mellon Foundation, and the National Science Foundation.

Nelson is a member of the advisory board of the Obama Presidency Oral History Project and is co-chair of the National Academy of Medicine Committee on Emerging Science, Technology and Innovation. She serves on the boards of the Andrew W. Mellon Foundation, the American Association for the Advancement of Science, Data & Society, and The Teagle Foundation. Nelson is also a director of the Brotherhood/Sister Sol, a Harlem-based youth development organization.

Raised in Southern California, Nelson is a Phi Beta Kappa graduate of the University of California at San Diego. She earned her PhD from New York University in 2003. She lives in New York City and Princeton with her husband and stepson.